Can I Drink While Breastfeeding?

I’m not a big drinker, so giving up alcohol during pregnancy wasn’t really a big deal. The risk of drinking alcohol while pregnant are well documented and while there are still debates on whether a small amount of alcohol is considered safe, most women I know have no issues giving it up for 9 months.

But if you chose to abstain from alcohol during breastfeeding because you believe it to be harmful, that hiatus can be extended for 1 to 2 years or longer in total, which may deter some women from breastfeeding altogether. A relaxing glass of wine to end the day or a margarita while out with friends for Mexican food may not sound like that big of a deal to give up for a few years, but for moms who give up so much to care for newborns, abstaining from it completely could become one of many factors that discourage a woman from nursing.

I’ve delivered and breastfed 4 children, and not once has a physician, lactation consultant, or labor and delivery nurse spoken to me about alcohol and breastfeeding. That’s probably not the case for everyone, and because I’m a medical professional it may have been assumed that I didn’t need the education, but it was never brought up.

The medical community is fairly silent on this issue, which may be because the research and evidence are so limited. This leaves room for lots of opinions, and I’ve heard most of them. I’ve read stories about women being arrested at restaurants because they were drinking and nursing. I’ve read very well written articles and social media post by healthcare professionals that explain how there is essentially no alcohol in breastmilk when looking at it relatively. So I went searching through the research to find out for myself what we know.

The aim of this post is to share with you the information available and allow you to make a comfortable decision about alcohol and nursing.

While the reason for this is likely multifactorial, most healthcare professionals recognize any factor that may discourage moms from breastfeeding should be addressed if possible, and alcohol is no exception. Unfortunately, there is limited research and evidence on the effects of consuming alcohol while breastfeeding, so the most conservative recommendation would be to abstain completely.

However, the research and information available do suggest there are ways to safely consume reasonable quantities of alcohol without harming your baby, and the benefits of exclusive and continued breastfeeding likely outweigh any harm moderate amounts of alcohol could theoretically have. And when I say moderate, I mean likely minuscule.

First off, let’s all agree that if you’re impaired you shouldn’t be nursing. The biggest danger with drinking and nursing isn’t going to be how much is excreted in the milk, but the dangers associated with being impaired while taking care of your baby. Dropping your infant or dozing off while holding them in an unsafe sleeping position could have disastrous consequences.

The purpose of this post is to make an educated decision on whether or not to drink in moderation while nursing, not whether you have the right to party hard with baby in tote.

The American Academy of Family Physician’s position states “alcohol passes easily into breast milk but is also cleared from breast milk as rapidly as it is cleared from the bloodstream. Although it is safest for nursing mothers to consume no alcohol, small amounts of alcohol (e.g., one serving of wine or beer per day) appear to be safe. It is ideal for the mother to wait 2 to 2.5 hours after finishing the alcoholic beverage to nurse again.” The only source cited for this is from the NIH US National Library of Medicine Toxicology Network.

The American Academy of Pediatrics has a very similar position, stating “Alcohol passes through breast milk to a baby, so it’s best for women to avoid the habitual use of alcohol while breastfeeding. Many women have heard that drinking beer increases milk supply. This is an untrue urban myth, and women should be advised as such. Studies suggest that consuming alcohol of any kind may decrease the amount of milk the baby drinks. Further, alcohol can change the taste of breast milk, making breastfeeding objectionable to some babies and decreasing the known positive effect associated with breastfeeding. If a woman chooses to have an alcoholic drink, it’s best to do so just after she has nursed or expressed milk rather than before, and allow at least 2 hours per drink before the next breastfeeding or pumping session. That way, the body has as much time as possible to rid itself of the alcohol before the next feeding. There are concerns about long-term, repeated exposures of infants to alcohol via mother’s milk, so moderation is definitely advised. Chronic consumption of alcohol may also reduce milk production.”

Both groups say the safest thing to do is abstain from alcohol while nursing, but provide caution and recommendations for those who chose to consume some alcohol. It’s clear they are taking the most conservative position with the information available.

According to the cited studies, the time for alcohol to be completely eliminated from breast milk is dependent on the weight of the mother, but generally speaking between 2 to 2.5 hours after consuming one alcoholic beverage. For every additional drink, this would need to be multiplied (for example 4 drinks, one should weight 8-9 hours). So if you wanted to be extremely cautious, you would wait 2-2.5 hours per drink before nursing or pumping milk that is to be consumed.

Another study used by the Australian National Health and Medical Research Council to create their guidelines produced a table which provides more precise timelines based on weight as listed below. It should be noted that this is an estimate, as other factors such as body fat percentage, recent eating, and how fast you drink the beverage can also affect this. 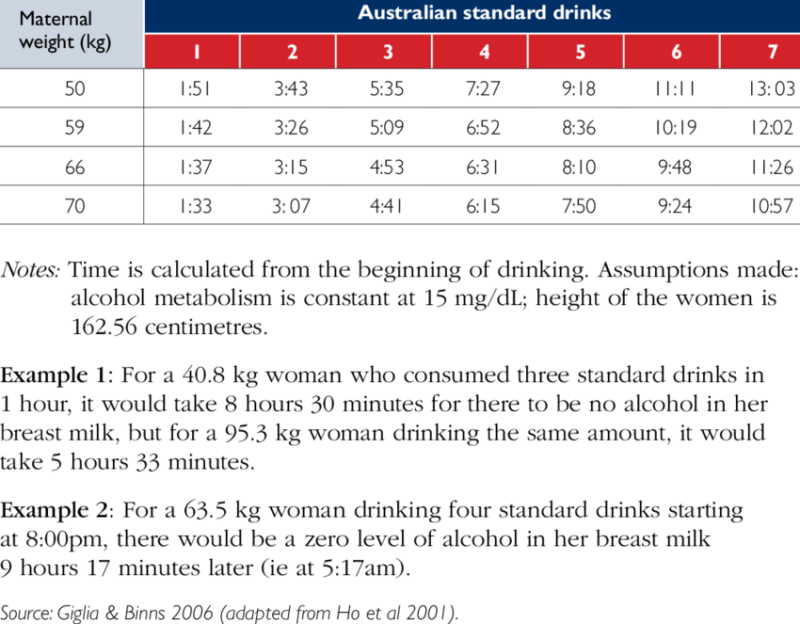 The toxicology report cited by AFP above is interesting to read through and echoes the findings that alcohol levels in milk mirror that of blood alcohol levels (for example if mom’s BAC is 0.08, then the concentration in milk is 0.08). We realize this does not mean the baby’s BAC is the same as the mothers, rather they are consuming milk that has a tiny quantity of ethanol.

Because it would clearly be unethical to give infants alcohol and test their BAC, the closest scenario we have to go with are computer simulations. The report estimates through simulations that after a mother ingest 250ml of wine (1/3 a bottle), the BAC of a 3-month-old infant would be 0.0038 percent, which is 1/25th of the legal limit of 0.08. Another study found even after consuming a fairly large quantity of alcohol, it was estimated 200ml of breastmilk would have about 180mg of ethanol.

To put that in perspective, imagine mixing two teaspoons of wine into a liter of breastmilk. And that was after the mother consumed a very large quantity of alcohol.

If we were to treat this information with a better safe than sorry approach and assume that even if minuscule, infants may be exposed to some level of ethanol, then what? My initial concern and I assume the primary concern for most, would be am I causing any harm to my child?

The most conclusive study I found reviewed most of the available research on this topic and provided some useful information. The purpose of their study was to look at the effect of alcohol on both lactogenesis (the physiology of breastfeeding) and the infant. This research suggests that occasional exposure to modest amounts of alcohol is unlikely to have an effect on a nursing infant. Great news. However, they did conclude that alcohol has a negative effect on breastfeeding performance.

Initially, there is an increase in prolactin, a hormone responsible for milk production. However, another hormone called oxytocin, which is responsible for let down and milk release, is inhibited. When this happens the baby can’t eat as much. And although the study found babies tend to nurse more over the next few hours to make up for this, the combined effect of these events cause a disruption in the baby’s eating and sleeping pattern.

Coming at this from a completely objective perspective, I was hard pressed to find any solid information confirming modest amounts of alcohol while nursing is unsafe for an infant. Even the 2.5-hour rule appears to be conservative. I would probably recommend new moms wanting to breastfeed consider abstaining from alcohol for the first 4-6 weeks while trying to establish milk supply and feeding schedules.

The research was pretty conclusive that alcohol can affect supply, which has a domino effect on the amount nursing infants consume, their feeding frequency, and subsequent sleep pattern. Even without barriers, developing a good feeding and sleeping schedule is a struggle and causes a lot of stress for many moms in those first postpartum weeks, and likely the reason some moms stop nursing much earlier than they desire.

My personal take after sorting through the research is that for the amount of alcohol I consume, which is not a lot, I don’t feel I need to worry about it. It’s not a big deal for me to time it so there are 2-3 hours between having a drink and nursing, but I also don’t stress about it if I’ve had a drink and my daughter needs to nurse sooner than that. That’s my personal opinion I’ve made based on reading the research available and cited by reputable sources. If you feel differently, that’s totally fine and I encourage you to ask your physician, pediatrician or healthcare provider and feel comfortable with your decision.

Can’t I just pump and dump?

I will dump my liquid white gold when hell freezes over. Mama’s who’ve ever breastfed, do ya feel?!? Because alcohol is cleared from breast milk at the same rate it is cleared from the bloodstream, waiting 2-3 hours per alcoholic drink will clear the alcohol from the breastmilk so it’s perfectly safe.

If you’ve consumed multiple drinks and feel engorged or uncomfortable before that time frame, you could pump and dump. If your supply is well established and you feel comfortable with the research that shows a tiny amount of alcohol consumed by an infant through breast milk is very unlikely to cause any harm, then you really don’t need to pump and dump. Again, this is a personal decision.

What about milk test strips?

You may have seen these in the nursing section and as far as I’m concerned, they are a waste of money and unnecessary. There are so many products out there preying on moms who want to do what’s best for their baby. These are expensive, unhelpful and unregulated (which means the FDA or a third party hasn’t determined how consistent and accurate they are).

Are you drunk? Don’t nurse. Are you concerned there may be a trace of alcohol in your system? We have already discussed that some trace amounts of alcohol can be present in your milk and is unlikely to cause any harm to your infant. If you prefer that absolutely no alcohol be present, then you don’t nurse after drinking for the recommended time for the number of drinks according to your weight, and a test strip isn’t really necessary.

I hope my nursing mamma followers out there found this helpful! Because of the medical nature of this topic I have listed the major sources used below. If you have any questions or want clarification on anything I’m happy to help!